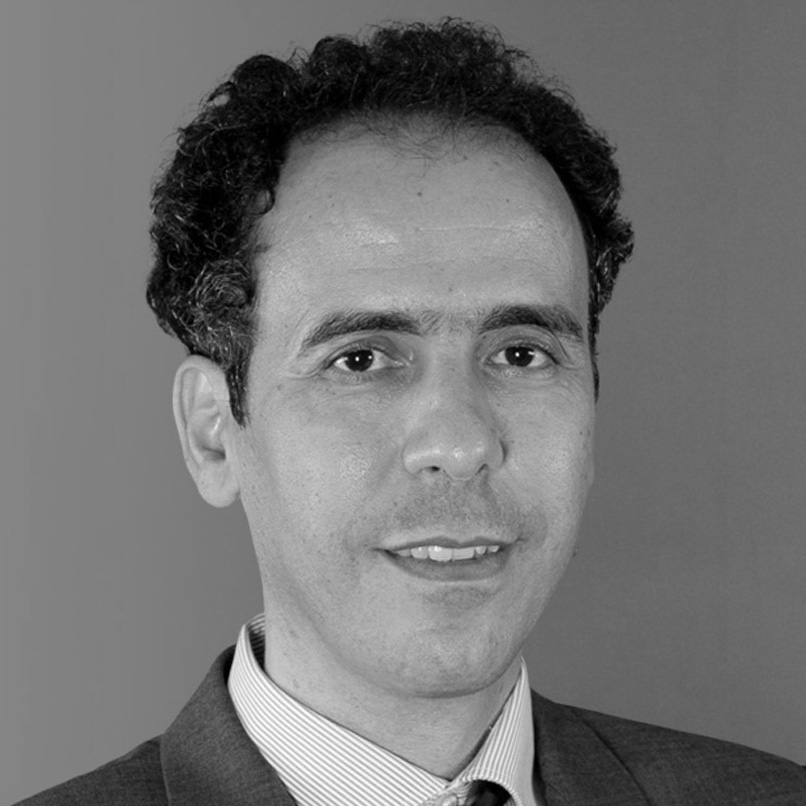 Senior Fellow at the Policy Center for the New South.

Morocco was among the countries not taking part in the March 2 UN General Assembly vote following Russia’s invasion of Ukraine. This position raised questions in Europe as Morocco is Europe's largest partner in the Maghreb. Jamal Machrouh, Senior Fellow at the Policy Center for the New South, sheds light on Morocco's perceived neutrality in the Ukrainian conflict in our third article of Ukraine Beyond the West.

Morocco did not take part in the March 2 demanding that Russia "immediately, completely and unconditionally withdraw all of its military forces from the territory of Ukraine within its internationally recognized borders." How do you explain this decision? More generally, what is Morocco's stance towards the war in Ukraine?

After "thirty glorious years of peace" Europe is now experiencing a full-blown war on its territory. This is a significant tipping point for both the European and global systems. The areas surrounding Southern Europe are particularly affected for two specific reasons. The first one relates to the breadth of this region’s geographic, economic and political ties with Europe. The second has to do with the West's demands for alignment — if not active solidarity — over its approach towards Russia's invasion of Ukraine, particularly regarding sanctions.

Morocco, as a strategic and historical partner of Europe, has adopted a clear and consistent position since the start of the Ukrainian conflict.

Morocco, as a strategic and historical partner of Europe, has adopted a clear and consistent position since the start of the Ukrainian conflict. This position is based upon two fundamental principles: support for the territorial integrity of Ukraine and a desire for a peaceful end to the conflict. This approach, as expressed by the Moroccan Ministry of Foreign Affairs in its February 26 statement, was re-stated on March 2 when the United Nations General Assembly adopted the resolution titled "Aggression Against Ukraine" cited above.

In this March 2 vote, Morocco absented itself. Seven other African countries did the same, including Togo and Ethiopia. This should not be confused with abstention, should not be seen as a mark of indifference towards the question under debate, and it should not be considered as a vote against the resolution. It was precisely to remove such ambiguity that the day the resolution was adopted, the Moroccan Foreign Affairs Ministry declared in a February 26 statement that "Morocco's non-participation cannot be the subject of any interpretation in relation to its principled position regarding the situation between the Russian Federation and Ukraine". The statement continued as such "the Kingdom of Morocco reaffirms its strong attachment to respect for the territorial integrity, sovereignty, and national unity of all member states of the United Nations".

In an article for The Economist, a battery of arguments was put forward seeking to explain the "non-adherence" posture of almost half of the African countries towards the Western resolution. Arguments range colonialism's legacy, leading to a reluctance to support what may have been seen as a "Western cause", to Russian extended influence over several African countries through the supply of arms and mercenaries.

For Morocco specifically, some commentators surmized that its non-participation in the vote was motivated by its rocky relationship with Algeria. Morocco did not want to give its eastern neighbor - historically a Russian ally - a further card to play against the fundamental interests of the Kingdom in the ongoing tug-of-war between the two nations over the Western Sahara conflict.

Whatever the motivations behind its non-participation in the vote, Morocco's position does not express a strategic shift - as the Kingdom remains firmly attached to both its traditional partnerships and the fundamental principles of the UN Charter - nor does it mean a tactical maneuver, given that the two-thirds majority required for adoption of the resolution would have been met days before the actual vote.

Whatever the motivations behind its non-participation in the vote, Morocco's position does not express a strategic shift.

In any event, the March 2 vote was an opportunity for Morocco to reiterate its unwavering commitment to the fundamental principles enshrined in the UN Charter, specifically to that of prohibiting the use of force against the territorial integrity of all member states, including Ukraine.

It is worth noting the consistency in Moroccan diplomats' preference to favor negotiation as the only appropriate way to deal with the Ukraine crisis. This approach is mindful of the atypical nature of this war: one which involves a country permanent sitting on the UN Security Council, and which has one of the world's largest nuclear arsenal. There is no doubt that Russia's veto power, coupled with its nuclear weapons, paralyzes the entire UN collective security system and deprives its resolutions of any practical significance.

On the basis of Resolution 377, the UN system cannot exercise its primary responsibility for the maintenance of international peace when a war involves a nuclear power who is also on the UN Security Council. That is why the power of diplomacy is more trustworthy, and perhaps more constructive, to find a lasting solution.

What are the current and longer-term economic consequences of the Ukraine war on Morocco?

In a globalized world of constant interactions, crises of any nature (whether economic, health-related or military) spill rapidly across borders. The war in Ukraine has further aggravated the dysfunctions of an international economic system weakened by the Covid-19 pandemic and the continued US-China strategic rivalry. Developing countries could quickly become collateral damage of the war in Ukraine as they do not have the same capacity for resilience built through alliances as more powerful countries do. A Laotian proverb "when two elephants fight, it is the ants that die" encapsulates this idea.

We can already identify three significant economic consequences for Morocco:

Morocco does not depend as heavily on Russia and Ukraine for its food supplies, unlike other African and Arab countries.

However, these three economic impacts should be put into perspective. Morocco does not depend as heavily on Russia and Ukraine for its food supplies, unlike other African and Arab countries. Ukraine only accounts for 26% of Morocco's imports of wheat and other cereals, and imports account for only about half of the Kingdom's overall consumption. Additionally, Morocco has long sought to diversify its sources of wheat so as not to excessively depend on one country or region.

Currently, among other nations, France, Canada, the United States and Brazil supply the country. Additionally, Russia is not one of Morocco's main energy products suppliers. On a more global level, the national strategies of diversified trade partners, energy transition, and modern agriculture ("Green Morocco") would appear to give the country some room for maneuver that may be particularly useful in these times of crisis.

What role, if any, does Morocco play (and could intend to play) towards the resolution of the conflict?

Morocco is closely monitoring the situation in Ukraine with concern. It decided early on to financially contribute to the UN humanitarian efforts and to those of neighboring countries to help war-affected Ukrainians. On March 22, Nasser Bourita, Morocco's Minister of Foreign Affairs held telephone discussions with both Russian Foreign Minister Sergei Lavrov and his Ukrainian counterpart Dmytro Kuleba. These meetings were an opportunity for Morocco to discuss both the war in Ukraine and actions that could be taken to strengthen bilateral relations. Furthermore, on April 27, 2022, Morocco participated alongside the 40 US allies, all NATO members plus other invited guests such as Australia, Sweden, Finland, Kenya, Tunisia, Jordan and Qatar, in the Ukraine-specific discussions held at the US base in Ramstein, Germany. Such examples of active Moroccan diplomacy show that the country is not indifferent to the war in Ukraine.

Morocco is seen as a reliable and responsible player, enabling it to become involved in the mediation of international crises, including dialogues between the Arab countries and Israel, and in the current situation in Libya.

However, due to the sheer magnitude of the war and the positions of the actors involved, the efforts of a single country - regardless of its goodwill - cannot silence the weapons in Ukraine. This is why a coordinated Afro-European approach would be more appropriate for constructive mediation efforts. The latter would seek both a durable peace and security guarantees for all parties involved.

A Europe aware of its strengths and responsibilities, as well as an equitable partner of a dynamic Africa and an intelligent federator of that cradle of civilization, the Mediterranean, could find a positive response from the Russians and the Ukrainians. The stakes are high: on the one hand, attempting to prevent the inestimable damage a new global war would bring, and on the other, concentrating resources and energies in order to face global challenges such as climate change and pandemics. With their firm links across the two continents, Morocco and France have a natural role to play in determining the emergence of such a coalition.

See also
Regions > Middle East & Africa > Russia
Brazil: Agribusiness Before Diplomacy
Three questions to Feliciano Guimarães
INTERVIEW | 17 June 2022 | Feliciano Guimarães
Brazil is the second country of our new weekly series. Between condemning the invasion of Ukraine and calling for neutrality, Brazil’s "ambiguity by design" position is guided by domestic questions. Feliciano Guimarães, Academic Director and Senior Researcher at the Brazilian Center for...
Next
Regions > Middle East & Africa > Russia
Mexico: Playing Hardball with the United States
Three questions to Luis Rubio
INTERVIEW | 10 June 2022 | Luis Rubio
The invasion of Ukraine by Russia on February 24, 2022, was met with strongly by the West, characterized by remarkable collaboration between the US and Europe in imposing sanctions on Russia and providing assistance to Ukraine. This determination is however not shared by the whole world. Although...
Next
SIGN UP FOR OUR NEWSLETTER
for a handpicked selection of analyses each week Yes please
Series |
Next
Publication -
Next
Europe et International | Moyen-Orient et Afrique | Russie
...
Next
Séminaire réservé exclusivement
à nos entreprises adhérentes
Restricted to
member companies
Next