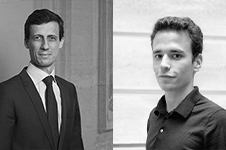 Marin Gillot is a Policy Officer at the Institut Montaigne. He works on environmental and energy issues, as well as on social responsibility. Benjamin Fremaux is a Senior Fellow for Energy and Climate at Institut Montaigne and president of the Idex Group.

Three years. Humanity has three years left to reverse the curve of progression of greenhouse gas (GHG) emissions, and thus manage to contain the warming of the planet below the bar symbolic of 1.5 degrees Celsius. This observation, as made by the latest assessment report of the Intergovernmental Panel on Climate Change (IPCC), is irrevocable. Since the signing of the historic Paris Agreement, European Union (EU) member countries have been committed to achieving carbon neutrality by 2050. In France, the National Low-Carbon Strategy (SNBC), adopted in 2015 and revised every five years, serves as a detailed roadmap to achieve this ambitious goal. However, the national trajectory remains largely insufficient today.

France is lagging far behind in terms of energy transition. While the country has reduced its GHG emissions since 1990, the rate of this decline was lower than in Germany or the United Kingdom. Over the period 2015-2018, France even exceeded its "carbon budget" of 62 million tons of CO2, leading to a condemnation of the State for "air conditioning inaction" by the administrative justice in October 2021. To meet the commitments made at the 2015 Paris Climate Change Conference, it will be necessary to almost double the annual rate of ghg emission reductions, reaching 3.3% between 2024 and 2028.

As part of a Europe-wide project entitled Fair Energy Transition for All (FETA), Institut Montaigne advocates for supporting the most vulnerable households in the energy transition. This note proposes to align with citizens' expectations and to focus support action for vulnerable households on the themes of housing, transport, and food. More generally, transition support schemes need to be redesigned to refocus them on vulnerable households. To these ends, this note contains an agenda of eleven solutions which should make it possible to initiate a just energy transition for all, the only way to reconcile the challenges of achieving carbon neutrality and those of strengthening social cohesion, reducing inequalities, and creating credible alternatives for assets including employment is threatened.

The publication of this note by Institut Montaigne is part of the FETA project. At the initiative of the King Baudouin Foundation, which coordinates a consortium of European foundations, this work aims to chart a course towards a just energy transition for all in Europe. It involves a total of nine European countries: Belgium, Denmark, Germany, France, Italy, the Netherlands, Poland, Portugal, and Romania. In France, Institut Montaigne worked in close collaboration with Missions Publiques, an agency specializing in citizen participation.

The project is divided into three distinct phases. Initially, Missions Publiques was responsible for organizing a series of focus groups, bringing together citizens considered vulnerable to the challenges of the energy transition. A total of 94 citizens with diverse situations were asked about their expectations and concerns when this change began. The results of these exchanges were the subject of a preliminary report written by Missions Publiques. Then, and based on the main conclusions of this report, the Institut Montaigne set up a working group, composed of experts on energy transition issues at the national level. This working group was responsible for drawing up recommendations for the public authorities based on citizen feedback. Finally, at a Fair Energy Forum, which was held on 10 June 2022 in Paris, the conclusions of this work were presented to some of the citizens who had been interviewed as part of the focus groups. In a logic of considering the voice of citizens, the recommendations have been supplemented and amended based on this feedback. The present work, which focuses on the national challenges of energy transition, will have to be completed by a European rendering. Addressed to the European Commission, and managed by the European partners of the FETA project, this report will aim to identify the ways of convergence of the challenges of accompanying the vulnerable people across the nine European countries participating in the project.

Without specific support for the most vulnerable citizens, the energy transition will not be able to succeed at the national level.

Among these populations, modest and very modest households which, although they have a carbon footprint on average lower than that of wealthy households, are more confronted with energy issues and their consequences. And for good reason, they generally live in more consuming housing and have less clean equipment, which exposes them to significant costs that could discourage them from taking part in energy transition. This relative fragility is further reinforced by rising energy prices and inflation that has been at work for several months.

In terms of housing, a subject on which the law on the energy transition for green growth (LTECV) requires a renovation of the entire building stock according to the standards "Low Consumption Building" (BBC) by 2050, some households are in a situation of vulnerability. Modest or very modest households account for 50% of the residents of thermal strainers - dwellings classified F or G according to the energy performance diagnosis - and 62% of their occupants are over 60 years. This inequality of access to sufficiently isolated housing is reflected in dramatic situations: according to studies by the National Observatory of Energy Poverty (ONPE), 11.9% of French households have spent more than 8% of their income for heating in 2019-2020, and 14% suffered from the cold at their home. In total, 53% of households used heating restriction strategies in 2020.

On the issue of transport, the situation is also urgent. The sector remains today the leading emitting station in France, and it will be necessary to reduce its emissions by 60% in less than ten years to hope to achieve the European target of a 55% reduction in emissions by 2030. On this theme, while low-income households are on average less motorized than the rest of the population, they often have older vehicles, which could allow them to be penalized in the context of the deployment of low emission zones (LEZs) decided to fight against air pollution. In 2018, the car fleet of low-income households included 66% of polluting vehicles (eligible for Crit'Air vignettes 3, 4, 5 and not classified), compared to 37% for the wealthiest households. Added to this is the fact that low-income households spend a larger share of their income on bus expenditure: 5.4% for the 1st decile, compared with 1.7% for the9th decile. In total, 3.6 million French people would live in a situation of "fuel insecurity" in 2021, according to the conclusions of the Barometer of daily mobility set up by Wimoov and the Foundation for Nature and Man.

Finally, the food issue appears to be important in the face of the objective of a just energy transition for all. In France, low-income households spend 18.3% of their budget on food, compared with only 14.2% for the wealthiest. However, this situation could change radically in the coming decades. Simulations conducted by the Institute of Economics for the Climate (I4CE) indicate that a transition to a more sustainable diet could also lead to a saving of nearly 30% rather than an additional expenditure of 67% depending on the modification of the food basket and the reduction of food waste. The challenge of supporting the most vulnerable is therefore high.

Citizens with unequal situations in the face of the energy transition

Starting from the concerns and expectations raised by citizens during the focus groups, a series of personas was imagined, in close collaboration with the experts mobilized by the Institut Montaigne in a working group. These standard profiles should make it possible to illustrate the diversity of vulnerable citizens encountered during focus groups and the plurality of issues they face. In total, the Institut Montaigne offers seven standard profiles for study. Each recommendation developed subsequently ensures that the impact of the proposed measures on these different personas is highlighted.

Profile #1 - The Lamberts, 75 years old, retired and living in a village

The Lamberts are retired and live on a cumulative pension of 2,000 euros per month. Inhabitants of a small village, they live in a condominium that needs to be renovated and are bearing the brunt of rising fuel prices. Indeed, their old vehicle is very consuming and their movements particularly constrained, especially in view of the state of health of Mr. Lambert.

Profile #2 - Anissa, 46 years old, single mother living on the outskirts of a city

A single mother of two children, one of whom is a student, Anissa lives on the outskirts of a large city. She lives in a poorly insulated dwelling that generates significant heating loads. Anissa mainly uses her car to get around due to the glaring lack of public transport in her neighborhood.

Parents of four underaged children, the Rosssi have a monthly budget of 3,270 euros. In the absence of a developed public transport offer, they are dependent on their two vehicles to get to work. In addition, the renovation of their gas-heated home is out of reach. However, the couple’s difficulties are likely to increase further: Mr. Rossi, who works on a gas-intensive site, wonders about the sustainability of his job.

Bruno is a low-skilled seasonal worker who lives on the French Riviera. Its use depends largely on tourist flows, which could be reduced in the coming years in connection with the energy transition. To cope with the coming changes in the labor market, he will have to develop his skills.

The Müllers run an organic farm and earn a net salary of €1,200 per month per person. If they feel particularly concerned by the ecological issue, they fear that their production costs will increase because of the energy transition. To date, they have not found any solution that would allow them to maintain their standard of living.

Parents of five children, the Hardings live in a medium-sized town of 15,000 inhabitants. Ben Harding is a self-employed construction worker and does not have enough income to invest in a less polluting vehicle that can allow him to go to his construction sites. At the same time, the growing expectations of its customers make its business less competitive.

Joseph is a student from Guadeloupe who has a monthly income of 828 euros. If he feels very concerned about the issues of energy transformation, he feels that he cannot fully act at his level. Its student residence is managed by a social landlord and has just been renovated. As far as food is concerned, it would like to consume more products from short circuits but considers their price too high.

Recommendation 3: develop financing mechanisms to encourage households to undertake comprehensive high-performance renovations, both in terms of subsidies and equity advances, making a balanced cash flow possible for households before and after renovation.

Recommendation 5: extend the scope of the clean vehicle microcredit to other expenses related to the ecological transition, in particular for efficient household appliances, and align the threshold with the personal microcredit.

2
In detail Encouraging the development of sustainable mobility In detail

Recommendation 6: increase the use of carpooling for home-work trips by setting up dedicated infrastructure, increasing financial incentives and developing inter-company mobility plans.

Recommendation 8: refocus and expand the various subsidies that encourage vulnerable households to purchase an electric vehicle (in particular the ecological bonus, the conversion premium and leasing).

Recommendation 9: provide low-income households with nearby locally-grown and better quality products by supporting the development of urban agriculture and short circuits in the most disadvantaged neighborhoods and in higher education institutions.

Recommendation 10: shift from generalized energy price regulation mechanisms to more targeted measures for vulnerable households, in order to support them directly during the energy crisis.

Recommendation 11: set up an energy transition account for low-income households.